Sounds like some Beta testers are not receiving email invitations to install the game. If you haven’t seen an email yet asking you to install TestFlight let me know right away! Here’s a sample of what you should see: 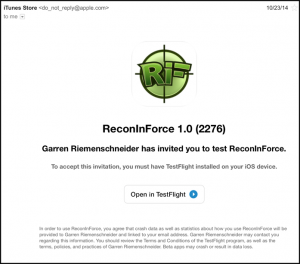 Come join in on the multiplayer fun if you haven’t already. Here’s some instructions to get you started on your device: http://www. reconinforce.com/dont-miss- multiplayer-beta-testing/
New Features: